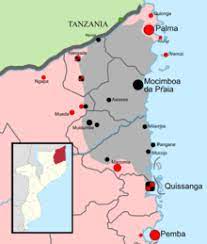 The European Union has approved a Military Training Mission in Mozambique to support armed forces there to protect the civilian population.