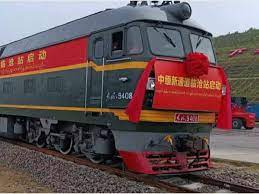 A new sea-road-rail link providing Chengdu (China) with access to the Indian Ocean via Yangon (Myanmar) was opened.