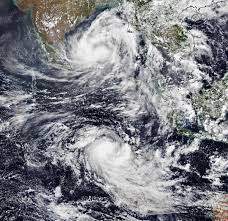 Cyclone Asani, active now in the Bay of Bengal, has a twin — cyclone Karim — in the southern hemisphere.