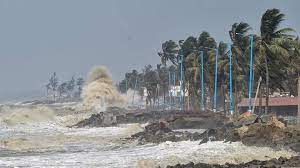 The cyclone seems to be carrying thunderstorms for the eastern coast of India which includes West Bengal, Odisha, etc.