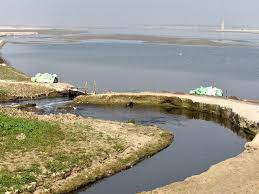 Union Minister Dr Jitendra Singh reviewed the progress of the Devika River Project of Udhampur in J&K and called for speedy execution of this model project.