Distribution Of Argon-40 On Moon: 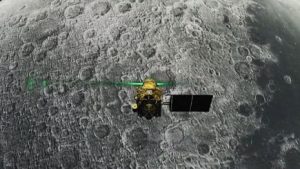 Chandra’s Atmospheric Composition Explorer-2 (CHACE-2), a payload onboard Chandrayaan-2, has made the first-of-its-kind discovery on the distribution of one of the noble gases, Argon-40.