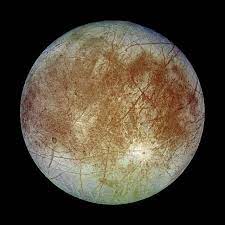 Researchers have said that there might be an abundance of water pockets beneath formations called double ridges on Jupiter’s moons Europa.