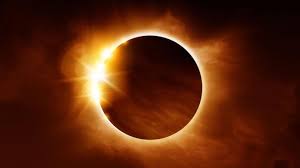 India and a few other places in the world will witness a partial solar eclipse on October 25, 2022.