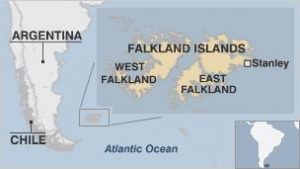 “The Commission for Dialogue” with the United Kingdom on the Falkland Islands was recently inaugurated by India and Argentina.

Falkland islands are an overseas territory of the United Kingdom located to the southwest Atlantic Ocean at the southernmost point of South America.
Positioned both in the southern and western hemispheres of the Earth.
They are also called Malvinas Islands.