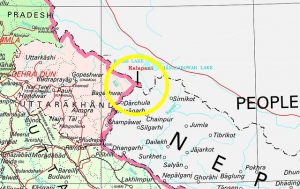 Nepalese political parties have a general consensus over the fact that Kalapani in Uttarakhand is part of Nepal’s sovereign territory, said former Nepalese Foreign Minister. However, India rejected this claim.

Nepal has published a revised official map incorporating the territory from the Limpiyadhura source of the Kali to Kalapani and Lipulekh pass in the northeast of the triangular region as its territory.