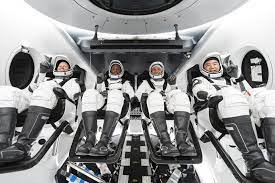 SpaceX and NASA are gearing up to launch astronauts to the International Space Station (ISS) as part of the Commercial Crew Program of NASA.