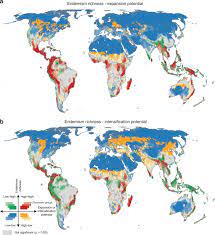 According to a new study, cropland area across the world increased 9% and cropland Net Primary Production (NPP) by 25% from 2003-2019.