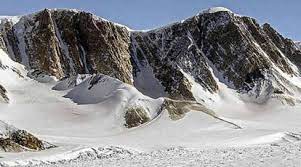 A report titled “Global glacier change in the 21st century: Every increase in temperature matters”, which states half the Earth’s glaciers may disappear by 2100.