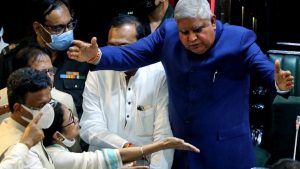 The customary governor’s address on the opening day of the budget session of a state assembly was mired in controversy recently in West Bengal and Telangana.