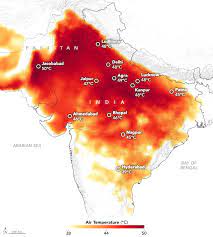 A new report by the World Bank suggests India could soon become one of the first places in the world to experience heatwaves that break the human survivability limit.