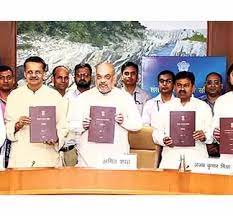 The Government of India provided that Hindi would be made compulsory up to Class 10 in the eight northeastern states.