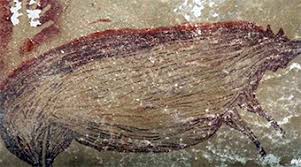 Archaeologists have discovered the world’s oldest known cave art — a life-sized picture of a wild pig that was painted at least 45,500 years ago in Indonesia.