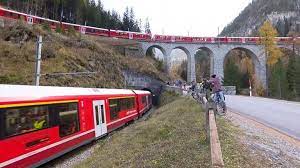 The world’s longest passenger train was operationalized in Switzerland during the 175th anniversary of Swiss Railways.