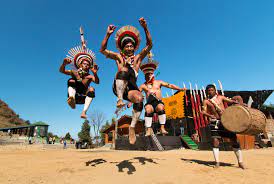 The state government has decided to call off the ongoing Hornbill Festival in protest against the killing of 14 civilians by security forces.