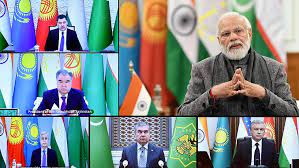 Prime Minister Narendra Modi hosted the first India-Central Asia Summit in virtual format on 27 January 2022, which was attended by Presidents of the Republic of Kazakhstan, Kyrgyz Republic, Republic of Tajikistan, Turkmenistan and Republic of Uzbekistan.