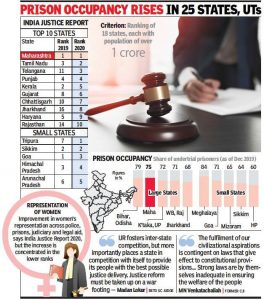 The India Justice Report (2020) prepared by the Tata Trusts in collaboration with the Centre for Social Justice, Common Cause, DAKSH, Vidhi Centre for Legal Policy and the Commonwealth Human Rights Initiative has been released recently.

In the last 25 years, only 1.5 crore people have received legal aid with the Centre spending Rs. 1.05 per capita in 2019-20.
High Proportion of Undertrials: