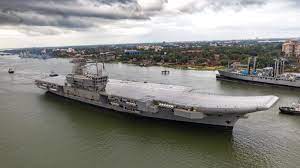 The Indigenous Aircraft Carrier (IAC) 1, which will be called INS Vikrant once it enters service with the Indian Navy, began another set of sea trials.