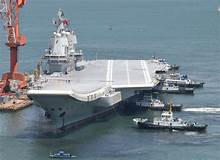 In June 2022, China launched its third aircraft carrier named ‘Fujian’, the country’s most advanced as well as the first “fully domestically built” naval vessel, as an aggressive Beijing sought to project its naval power in the strategic Indo-Pacific region.