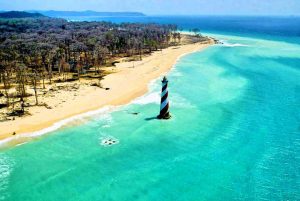 The Swarnim Vijay Varsh Victory Flame was taken to Indira Point, the southernmost tip of the country on August 22, 2021, as part of its voyage to the Nicobar Group of Islands. 2021 is being celebrated as Swarnim Vijay Varsh to mark the 50th year of India’s historic victory in the 1971 war.