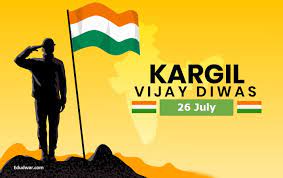 The 23rd anniversary of Kargil Vijay Diwas is being observed on the 26th of July 2022.