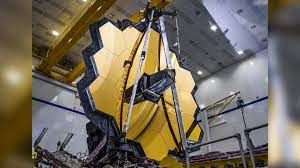 NASA has announced the launch of the James Webb Space Telescope (JWST) on December 24.