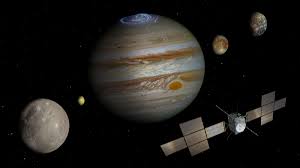 The European Union is to launch the JUICE Spacecraft in April 2023.