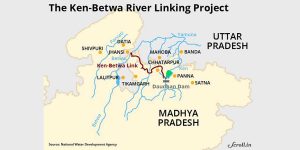 The Union Cabinet has approved the funding and implementation of Ken-Betwa inter-linking of rivers project.