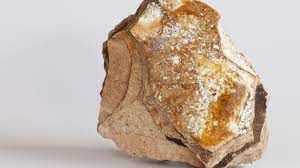 The Crime Branch of the Pimpri Chinchwad police has arrested two persons in Pune and seized 550 grams of ambergris, also known as ‘floating gold’.