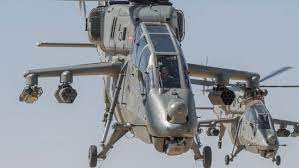 The Indian Air Force (IAF) is set to induct its first batch of indigenously-developed Light Combat Helicopter (LCH) in a major boost to its combat prowess.