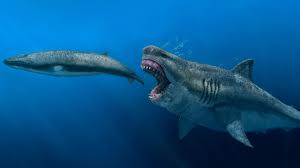 Using fossil evidence to create a three-dimensional model, researchers have found new evidence about the life of one of the biggest predatory animals of all time — the Megalodon.