The mission for Integrated Development of Horticulture: 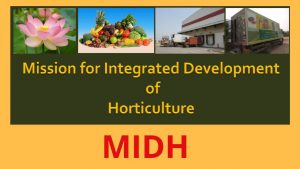 The Ministry of Agriculture and Farmers Welfare has provided an enhanced allocation of Rs. 2250 Crore for the year 2021-22 for ‘Mission for Integrated Development of Horticulture (MIDH).