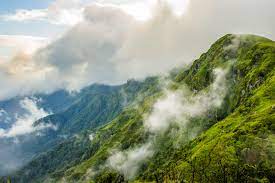 The Union government rechristened Mount Harriet, a historical tourist spot in the Andaman and Nicobar islands, as ‘Mount Manipur’.