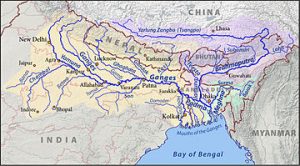 The Centre Government is contemplating creation of the National Interlinking of Rivers Authority (NIRA).