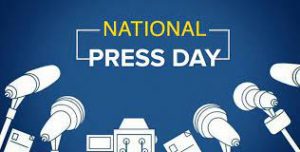 The day is observed on 16th November every year to commemorate a free and responsible press.