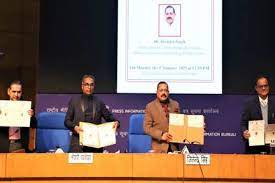 The Union Minister of Science and Technology released the Theme of National Science Day 2023 at a function in New Delhi.