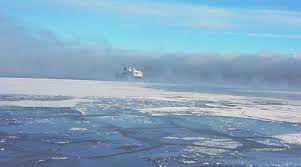 According to a study, it is stated that parts of the Arctic region near Norway are warming at as much as seven times the rate of warming in the rest of the world.