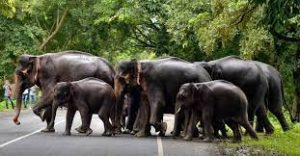 A Human-Animal Conflict occurred where a local man was attacked by an Elephant and a herd of elephants raided a field of 500 plantains.near Wayanad Wildlife Sanctuary, Kerala.