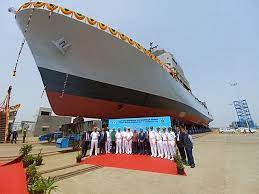 ‘Nirdeshak’, the second of the four Survey Vessels (Large) (SVL) Project being built by GRSE in collaboration with L&T shipbuilding for Indian Navy was launched on 26 May 2022 at Kattupalli, Chennai.