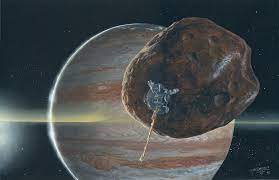 According to recent findings, Amalthea appears to radiate out more heat than it receives from the sun, which NASA suggests may be due to Jupiter’s magnetic field or from tidal stresses.