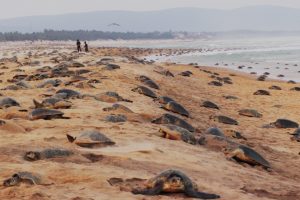 Pairs of Olive Ridley Sea turtles have begun emerging on the sea waters off Gahirmatha Marine Sanctuary along the Odisha coast, marking the commencement of the annual mass nesting of these endangered marine species.