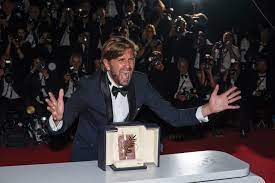 The Palme d’Or is considered one of the most prestigious awards in the film industry.