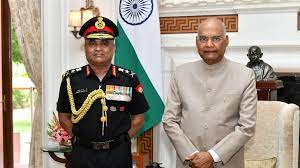 Army chief Gen Manoj Pande was given the Param Vishisht Seva Medal for distinguished service of exceptional order by President Ram Nath Kovind at a Defence investiture ceremony held at the Rashtrapati Bhavan.