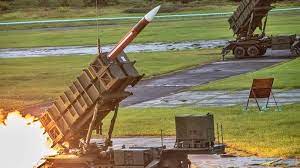 U.S.A recently announced that it would send its most advanced ground-based defence battery (Patriot system ) to Kyiv.