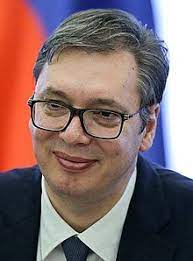 Aleksandar Vucichas been re-elected as the President of Serbia. The pollster organizations CeSID and Ipsos had predicted victory for Vucic.