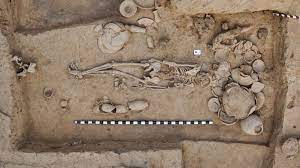 DNA samples collected from two human skeletons unearthed at a necropolis of a Harappan-era city site in Haryana have been sent for scientific examination, the outcome of which might tell about the ancestry and food habits of people who lived in the Rakhigarhi region thousands of years ago.