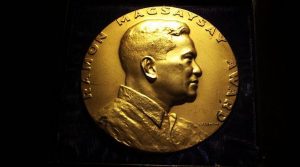 This year’s Ramon Magsaysay Award — regarded as the Asian version of the Nobel Prize — were announced.