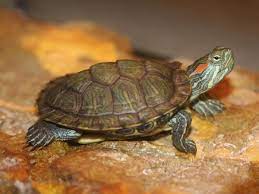 The invasive red-eared slider can become a major threat to the biodiversity of water bodies across the Northeast region of India.