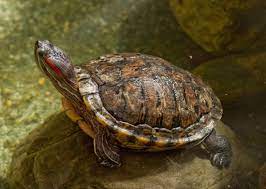 Experts have expressed the concern that the presence of invasive and non-native south Red-Eared Slider Turtles would lead to the extinction of native species of their own kind.