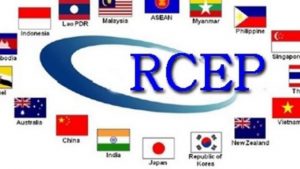 The RCEP will come into effect on January 1, 2022, marking the formation of the world’s largest free trade zone in terms of trade volume.